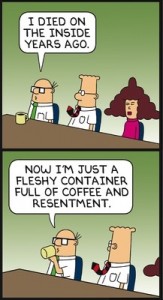 The first caveat to this nonsensical post is that Scott Adams’ Dilbert cartoon strip is NOT approved literature for the squeamish.  Funny indeed, but painful.  In the words of the immortal Scott Adams: Change is good, You go first.  The therapy lightbulb joke is: How many therapists does it take to change a lightbulb?  Only one, but the lightbulb has to want to change…

So lets get to what brought me to this point.  Lot’s and lots of Jack Daniels.  It becomes a habit.  Its such an easy thing, you go to Von’s or Albertson’s or Ralph’s or just walk down to the corner liquor store.  No trips to Compton or Pacoima to meet someone.  No clandestine telephone calls.  No subculture.  See how easy that was?  My addict friends all have dealers and phone lists and lots of shit to put up with; dark neighborhoods, crack houses and seedy motels.

It took a slow change to get me to the point of drinking obsessively.  I have my ‘victim card’, everyone’s got one.  My ‘excuses’ for drinking.  The REASON I drink is because I have this disease; my EXCUSES for drinking are myriad.  It took a while to build up.  I have a lot of friends who obsessed over alcohol and/or drugs after their first taste, their first snort, but it actually took me a while.  I guess I’m a little different than some.

But it was a change.  As I said, for some it was an instant gratification kind of change; for me it was gradual.  A change nonetheless. And it was another change for me to stop.  That was gradual too, I slipped here and there.  And of course there was a lot of therapy and lots of AA meetings.  Before I go further, you can dis AA all you want, all I know is I use every tool I can get my hands on to keep this change in place, AA is just one of those tools.  Change is not easy, it requires constant vigilance.  I can’t always call my therapist, but I CAN always call another drunk on the phone for a little assistance.

“We admitted we were powerless over alcohol – that our lives had become unmanageable.”

Pretty straightforward, though there are still those who can’t quite grasp the concept.  The Big Book is pretty immutable.  I would like to make just a little change to the first step.  I’d  change ‘…become unmanageable…’ to “…become Totally Fucking unmanageable…” but that’s just me.

I can’t change though, not without help.  But I did have to stop this vicious cycle, the death spiral.  I often asked: “Who the fuck cares if I live or die?”  Somewhere along the line I had an inspiration.  I CARE!  Now I did not want to eat the humble pie, but I was sick.  Very sick.  I think the thing that finally made me eat a piece of the pie was waking up in the parking lot of a church one night, not knowing where I was or how I got there.  I was supposed to be at a meeting inside the church building.  I had called a fellow drunk and he told me to meet him there.  Somehow I made it to the parking lot, completely blacked out.  I didn’t make it to the meeting, they were all gone by the time I woke up.  The next day I checked in.  I blew a .o4 when they admitted me, I was half lit.

I have so many weird things I do. So many defects.  Step four, but it’ll take a month of writing to cover that one.  Biggest defect?  I love to lie.  Why do you think this domain is named Lies I Told Myself?  I don’t just lie to other people, but I think I’m going to register Lies I Tell Everyone Else.

Fear is the great motivator, or if you like, demotivator.  Hmm…  Spell check is telling me that’s not a word…  So driven by fear, I lie when the truth sounds better.  My mom used to say that.  She was right.  Fear motivated.  It’s all because of fear. Well, fear is really my big excuse. Reasons and excuses.  I’m afraid of what someone else will think of me. They mustn’t know that I’m worthless, weak, ineffective.  So out of bluster, and to impress people, I make shit up. The fear is stifling sometimes. And without help, I’ll die of that fear. I can’t let someone know that I don’t know. So what then is the cure?  Well, there are many, but really it’s humility. Oh, but that’s so hard!  Easier to fabricate.

So somewhere along the line, that big gaping hole of fear and loneliness (yeah, right there in my middle section, do you see it?) began to be filled.  It’s a struggle every day, that empty feeling. So with a little bit of spirit I’ve found, you might call it spirituality I guess, that emptiness seems to matter less. The fear goes away. It’s freedom.

If you’ve read the front page of this site you’ll see a bunch of quotes.  The one at the top of the list is one my mom used to repeat: if you don’t lie you never have to remember anything. Later on, I found out it is a Samuel Clemens quote.  He (and my mom) were right.

Someone made a comment at a meeting the other night about software.  I know all about software, I make the machines do my bidding.  I’ve been a ‘programmer’ since 1980.  Yeah, since before some of you were born.  The comment was that we have to rewrite our software; we have to reprogram ourselves. It surprises me sometimes, the things I hear at meetings. Yes, it’s what we have to do. Become humble by changing. Ouch!  Change is good, you go first. I have a lot of trouble changing myself.  So I say a prayer and ask for Acceptance, Courage and Wisdom. Only my prayers and what my friends call a higher power make it so I can change.  Cant really do it myself.  I get by with a little help from my friends.  Oh, wait, that’s another story.