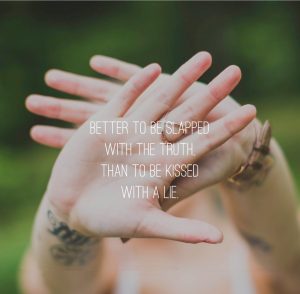 It is not a pleasant thing to watch the spread of truth.

A lover to some, a succubus to others. For some, the truth is the fighter who fights alongside you. For others it is a fighter who punches you in the face. The truth spreads like a glorious light, like a sunbeam burning through the mist and sometimes the truth spreads like a black flecked virus. The truth lurches and careens and dances and smashes its way across the human landscape.  When the truth is freed and it does it’s horrible bloody surgical work across the landscape and it leaves some elevated, dancing, and flying and some curled up weeping.

The truth is not pretty as it spreads.  The truth sometimes it spreads like a bloodstain; it is a wound to the prior illusion that spills and spreads and oozes. The truth reads to some like a hymnal and to others like a funeral list, a casualty list.

The truth comes to some as beautiful swordplay and to others like a midnight stabbing. The truth is glorious and terrible in turns, the two sides of Janus, the truth is the laughter and tragedy masks of drama. The truth can be a caress or a slap, both massage and beating.

The truth does NOT always set you free.  Perhaps, maybe eventually, but most often it reveals you’re in a cage.

I felt more free before the truth. I thought I was in a field, it turns out I’m in a tiny cage.  Ooohhhh, I thought the people around me were my friends; they were succubi and vampires, fully.   The truth was often founded on limiting my potential, invested in keeping me small like them.

The truth turned the light on, I’m in hell.  I thought it was just a lot of sunset; no it’s hell itself.  Now, though, with the light on, maybe I can begin to burrow out, but it’s pretty horrible when the lights go on. We think the truth is some kind of wonderful starlight or moonlight that guides us through a challenging midnight landscape.

No, no, the truth is like a bomb. BOOM!  The truth blows us wide and high into the sky, spins us and turns us and shreds us and we fall in pieces and try to reassemble ourselves into a human shape. The truth is shellshock. The truth is being buried in a coffin of reality and hoping you can claw your way out and that there will be somebody there when you get to the surface. Maybe, maybe maybe…

The truth is like being fired from a cannon into a desert and hoping you’ll find an oasis all the while staggering and blindfolded.

The truth comes along with facts and reason and evidence and arguments and data and says I think I am alive but I am but a ghost cast by historical prejudice. I think I have form and I have shape, I think because I move I live. I am a skeleton blown by the winds of all the bullshit that came before.  That is who I am. Who I am is who I’m not.  Who I am is somebody who was evacuated and filled in with the prejudice and lies and servitude of the masters of mankind.

I am a useful robot and a useful idiot designed in the vast horizontal slave market of whacking down anybody who sticks their head up from the trench of delusion. I think I see something! Cut em down. Hey is that the phone ringing? Is that the truth? SMASH the phone, don’t find it!

Oh, we all think we want the truth, and then someone comes along and speaks the truth. Fuck you here’s some hemlock. Fuck you, you’re a cult leader.

You’re a RACIST! Fuck you!

This is the truth? We all want the truth don’t we? Truth is cool!  No, not that truth.  Oh, no, no, no no.  That truth? That’s BAD truth. Good truth is over there, with the comfortable delusion. This Bad Truth, causes Problems Truth. Ah, somebody speaking the truth? Nail him up. Fill him full of hemlock. Write slander about him. Tell everyone he’s a terrible guy, he’s got the truth. We must put the mark of Cain upon him. He shall wander through life accursed because he has facts that we don’t like. He’s a fascist! No, he’s a factist. You’re missing a T. It’s not AntiFa it’s AntiFact.

That’s where we are as a society. But thank god we can finally see it.  Thank the internet and thank the truth tellers that we can finally see it. Finally we see the shadow cast by humanity when the truth is visible at the click of a button. Truth is visible at the swipe of a fingertip. You can finger the truth. And impregnate your mind thereby to mix analogies.

This sounds so GOOD! “The arc of the universe is long, but it bends towards justice” Um, NO IT DOESN’T.

Here is some truth: The last shall become first, He who is highest shall be cast down, The lowest shall be made high, the meek shall inherit the earth.

The future is owned by the people with the courage to say they do not know. With the courage to reject immediate prejudices, easy made solutions and hand tailored bullshit that passes for facts all throughout history.

Thank you Stefan Molyneux for these blinding words of wisdom, painful though they are.

So I had the Stefan Molineaux YT video posted here, same words as above, but all of his content has been removed.  He speaks way too much truth.  The truth is indeed a double edged sword. Socrates was condemned to death in 399 BC after he was found guilty of impiety and of corrupting the youth of Athens. … Socrates was put to death not only because he had attracted a reputation, mostly deserved, for being a social nuisance, but also because he let it happen.