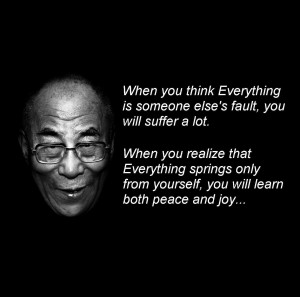 He did it, he’s the one! (He being the voices in my head pointing at me…) Why are the accusations always in my head. Why do I feel so guilty? Might as well have another double whiskey, I’m going to get accused anyway. Why am I behaving badly? Why did I treat other humans that way? Why can’t I just shut up and listen? I don’t know, maybe I have no real passion. I wrote about just listening in my post on ‘Passion’ four months ago. Shut the fuck up and listen; it isn’t about the nail. Why do I feel badly and why do I behave badly? My therapist tells me I shouldn’t even chastise myself with the ‘Shut up and listen’ line because it invites defensiveness.

So I said I behave badly. What is BADLY? It’s a pretty vague concept. I was once told I’m a terrible father. I felt BADLY, but why? What does ‘terrible father‘ really mean? I’ve been told I’m a bad husband. At least I recognize the word bad there, but I still don’t know what that means. Maybe I’m supposed to feel bad. What should I feel? Ahhhh! There’s the rub. WHAT SHOULD I FEEL? Well, if I have to ask that one, I’m really in trouble. I’m adrift, lost in the woods. No, way worse, I’m lost in downtown Detroit without my compass.

I’m being asked almost on a weekly basis about feeling ‘bad’. We all have a compass inside our hearts. It gives us direction, it tells us which way to go. Or perhaps what it tells us is which way NOT to go. It’s a moral compass. The compass is a very simple instrument. My little boy scout compass (almost) always points in one single unfaltering direction. A moral compass does that, but in a spiritual way. And unless the sun is behind the clouds, I don’t need the boyscout compass anymore, I know, almost instinctively which way north lies.

What do moral and spiritual even mean? Well, I guess I’ve gotta get myself a dictionary now as well as a compass. Moral denotes conduct or duties based on what is right and wrong. Morality is considered to be the basis of character and is wrapped around ethics. Uh, oh. One man’s right is another man’s sin. OK, what is sin? Well really, another question needing answers. According to Google, sin is an immoral act considered to be a transgression against divine law. But what divinity? What ‘God’? What if I don’t even believe in deities? Oh so many questions! They go on in my head endlessly. I think that’s how I started this post!

No, a sin is not a transgression against divine law, it’s true meaning is from Greek: To miss the mark. It’s much easier to comprehend when I say I have a bad or negative or even a strong feeling because I’ve missed the mark. Father forgive me for I have sinned. I missed the target, I missed the boat, I missed the mark. Ooops. Uh Oh. Damn! Shit! Fuck! Why did I DO that?

But it becomes even more confusing when I answer that question about why did I do that and then start pointing fingers. At others. People, places and things have done this or that to me and so I justify my existence through denial, blame and defensiveness. The minute I realize I’m being defensive, trying to defend my actions, I’ve got to stop and pause. Hmm…

But I don’t always do that. Stop and pause. What did I do wrong that my moral compass is telling me to take a defensive posture? PROBABLY I took an OFFENSIVE position and struck first. I didn’t follow that compass to begin with. I was wrong. Uh Oh. I am ssssssssorry, I was wwwwwrong. Oh man is it hard to say that. My mind just doesn’t want to accept the fact that it missed the mark and I made a mistake.

Whose ‘fault’ is it? Hmm… As the Dalai Lama states in my meme when I think Everything is somebody else’s fault, I suffer. My compass tells me so. It is SO hard to realize it all springs from ME. NOOOO! I Can’t Be Wrong. Well, yes I can. I can at least pause and begin to ask what my part in it is. My moral compass is not like my other sense of direction, at least not yet. I don’t ‘instinctively’ know which way good and evil are. But I’m learning!

Two years ago I didn’t care, let alone consider the benefit of figuring out my part in what caused a difficult situation to arise. I never thought I had a part. Back then everything was everyone else’s fault. I was the one wronged so therefore I was always right. It was beyond denial, it was delusional, the tunnel vision kept me focused on what made me feel I had the upper hand, always being right, all the time, no matter what.

Today I know differently. The world does not revolve around me and what makes me feel better. Well, sometimes my wife might disagree with my ability to adhere to this statement, but we’ll just leave that alone for now. My therapist tells me I can be right or I can be in a relationship.

What is my part in it? Well, if indeed all I’ve done is miss the mark, I can try to do it again. I can forgive myself and give it another shot. What did I do, and how can I improve it. Steady my aim, take a deep slow breath, grab another arrow from my quiver, pull back on the string and release again.

I started this post with my game of he said, she said. Questioning my part in things isn’t always about who said, or did, what to whom. This is the fucking bitch about it, I need to figure out WHY I’m feeling disturbed. Why is my compass off. What the hell is this ‘reaction’ from. Why am I being so stubborn, so sure I’m smarter than that person, and she’s attacking, insulting or belittling me? Maybe I’m harboring something, maybe my brain (oh that amygdala) is trying to protect me from a situation it saw as dangerous three days ago, or a year ago, or even THIRTY years ago. Like my wife, my amygdala has a mean memory; it records everything. Especially the things it reacts to as ‘dangerous’. Why am I taking this out on the grocery clerk, the poor guy driving down the road, the waitress or that person who’s always the culprit, my wife. More of those endless questions.

My moral compass starts to fluctuate and spin. While both the concept of a moral compass and the definition of morality are simple and clear, the concept of what constitutes morality is not. One person’s moral compass may not point in the same direction as another’s as far as ‘right’ and ‘wrong’ conduct and belief are concerned. Even the truth with a capital T comes into question, though if you read the quotes on the front of this blog about Truth, you’ll see a quote from the great Sci-Fi writer Frank Herbert: “The purpose of argument is to change the nature of truth.” Want to know about right and wrong? There are as many definitions as there are religions. Check out some quotes on the subject, and tell me you’re not more confused. Sigh…

Fear. It is so important I understand how fear affects me and how it drives my behavior. Only then will I start to see situations and people more accurately and respond more appropriately. When someone is behaving ‘badly’ and that little part of my mind, the amygdala causes me to ‘believe’ they are attacking me or they are being defensive, critical or that horrible thing, judgmental, its is not really about ME.

Fear is the real reason I behave badly. Fear makes me selfish, defensive, mean and cranky. Every time my compass points out I’m behaving ‘badly’, I have to stop. Just stop. Take a breath. My mom used to tell me that I should count to ten when I feel angry. My reaction will be different. My anger is just misplaced hurt. Fear is the real reason I’m behaving the way I am. What is it I’m afraid of. What fear is driving my reaction to a perceieved attak? What the hell am I afraid of?

My compass is pointing out, accurately I might add, there is fear behind my behavior. I’ve begun to see these situations for what they really are. I need to be vulnerable, so I can have courage. I’m no different than the cowardly lion.

Yep, I have to watch and wait. I do cowardly things, yet I know I’m not really a coward. I’ve jumped off cliffs with a hang glider, I’f surfed some big ones at the Rincon and I’ll jump off the cornice without a blink or a second thought at the top of Mammoth mountain!

Perhaps I should listen to the Dalali Lama. He speaks of right and wrong sometimes. “Sometimes we engage in actions purely out of indulgence.” and further: “..normally when we give in to ordinary emotions of anger, hatred, strong attachment, and greed, we do so without any sense of restraint. Often we are totally oblivious to the impact our behavior has on other sentient beings. But by deliberately cultivating the thought of regarding others as superior and worthy of your reverence, you provide yourself with a restraining factor.” Uh, oh, he may be speaking of humility. Other sentient beings? Up until a couple years ago, I didn’t know there were other sentient beings. I guess I need some help.

“…Don’t you think the Wizard would help me too?…” “…We’re gonna get him a heart, and him a brain…” “…I’m sure he could give me some courage…” “…well, but wouldn’t you feel degraded to be seen in the company of a cowardly lion?…”

Maybe not. Maybe my life hasn’t been unbearable. Maybe only when I succumb to my base instinct to anesthetize myself. Maybe I can make it through. I’ll have some faith. Perhaps I can actually pay attention to that moral compass and stop reacting. Breathe in and out. So, I’m off to see the Wizard. Maybe he can explain it to me, or maybe I shouldn’t pay any attention to the man behind the curtain`…