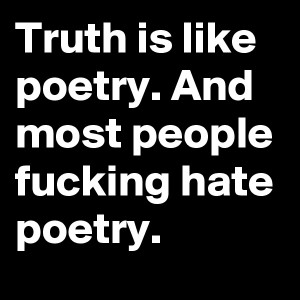 …And everybody fucking hates poetry. I heard this line in ‘The Big Short’. Nobody saw it coming. Nobody ever does. Let’s just ride the wave. I’m making money man. There can’t be an end to THAT. Denial ain’t just that river. I watched the movie with some trepidation, but having seen how it all happened, I don’t blame the big banks, I don’t blame the guys selling the mortgages, I don’t blame the government (except for bailing out the ‘too big to fail’ banks on the backs of the taxpayers) and I don’t blame the people who wanted to be homeowners. I blame the truth that so many people were so blind to see. “The purpose of argument is to change the nature of truth.” – Frank Herbert

The truth is so painful, we have to go pick up a drink. None but a few saw that the emperor really was naked. And when the pain hit, the apocalypse (well sort of) came. Quick, doc, I need something to kill the pain. Where is my medication? Oh, it’s at Albertson’s (or Von’s or Ralph’s or the corner liquor store or the Bar)! So you’re telling me it will kill me? I don’t really care because I need it.

It’s why I lie to myself, because the truth seems so much worse. It kinda makes me a bit of an idiot, even though I think I’m really smart. Lies are fraud and really I am suffering from idiocy or perhaps just a little mental illness. Well, maybe a LOT of mental illness. I’ve actually begun thinking of addiction as a mental illness. And of course I have a number of scholarly experts, including a number of good doctors at the NIMH, backing me up. Psychiatrists, therapists and Neurobiologists are beginning to think of Alcoholism and Drug Addiction as a mental illness. Because addiction changes the brain in fundamental ways, disturbing a person’s normal hierarchy of needs and desires and substituting new priorities connected with procuring and using the drug, it is being considered a mental illness. The compulsive behaviors that override the ability to control impulses despite the consequences are similar to hallmarks of other mental illnesses.

In the interesting tale of The Big Short, Brian Gosling’s character says, “Tell me the difference between stupid and illegal, and I’ll have my wife’s brother arrested.” Are we stupid or are we illegal? Yes. Some of the stupid things we do are illegal. Now perhaps calling me stupid when I drink is an insult to stupid people, but boy are some of the things I do stupid. And of course I really shouldn’t be berating myself if I really am sick.  So rather than call myself an idiot, let’s just say I’m sick. Very sick.

Of course the definition of insanity describes me perfectly when I’m downing a quart of Jack Daniels. Doing the same thing over and over and expecting a different result. I am NOT being truthful with myself. Hence, this blog AND my domain; Lies I Told Myself. I can no longer delude myself, I’m in pain and I want it to stop. The pain goes away when I drink, even though it brings on other pain. I want my pain killer NOW. Rather than work through it, I’ll anesthetize myself. If you read my piece “A muted cry from myself,” you’ll understand about the anesthesia, and my aversion to anesthesia in general, and my inability to stop anesthetizing myself. The Truth will set me free… The Truth is out there… Truth with a capital T.

It’s beautiful, it’s poetry! And everyone hates it. Especially me. I have a gas pedal, but no brakes. Well, really, it’s my brain, not me, that has no brakes.  I simply cannot stop myself. Or can I? Well, probably not without help. GO GET SOME HELP! Even though the truth is within me, and I know what the truth is, my brain is designed to respond to Dopamine. Dopamine is a pain killer; probably far superior to Heroin. Actually, dopamine is an even more effective emotional pain killer than a physical pain killer. When I drink enough Jack, ALL the pain goes away. As a matter of fact, EVERYTHING goes away. I black out and everything is gone. Why not just take out my Ruger and blow my brains out? Well, that’s pretty final, and alcohol is temporary. At least up to a point. Add enough alcohol to my system, and it has the same result as a large caliber projectile to the head. Once a person gets to a Blood Alcohol Concentration of .40, they are (I am) subject to probable coma, possible death due to respiratory arrest and have surpassed the level of surgical anesthesia.

For those of you who are wondering what the truth is, Psychology Today has a list for you. The eleven symptoms of Alcohol Use Disorder. They come right out of the DSM 5; F10.10 F10.20. These symptoms also apply to OTHER substance abuse. We’re all pretty fucking sick.

Here are the descriptions/symptoms; read ’em and weep:

The Eleven Symptoms of Alcohol Use Disorder

Please note, the parenthetical additions are my emphasis…

The presence of at least 2 of these symptoms indicates an alcohol use disorder (AUD). The severity of an AUD is graded mild, moderate, or severe:

Truth is like poetry, and everybody hates fucking poetry. I’ll get on my knees and pray we don’t get fooled again…